I know I've said that I'm usually not partial to gel nail polish, but I cannot deny that it is really practical for me.  I suppose my main concerns were that I wouldn't be able to find a good variation of colours and that doing art would be too difficult.
Welp, I've proved myself wrong. 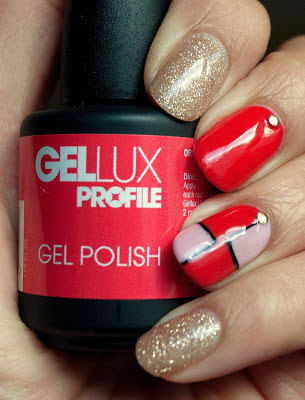 This is Oriental Poppy, with Cherry Blossom (pink) and Gold Rush. 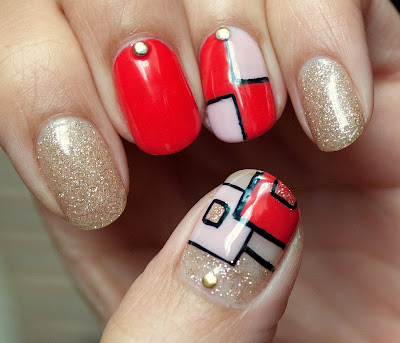 This took a little longer to create (not much) than a manicure with normal polish might've...but this is because I had to cure every single layer of gel polish that I applied, before going on to the others. Sound excessive? Well, it wasn't, considering it only took 30 or so seconds for each coat to cure under an LED light (it would've taken 2 minutes with a UV light!)
The only thing I had issue with was the black acrylic paint. Initially, the lines were much thicker, but after curing, the top coat over the thick lines bubbled. After each layer of gel is cured under a UV/LED light, there is a sticky layer left. This is not removed if you are going to continue applying more colours or topcoats - this sticky 'dispersion layer' is what bonds one layer of gel to another. I have a feeling that I covered too much of this dispersion layer with my acrylic paint and this caused the topcoat to bubble in these areas. Had I used a black gel polish, I wouldn't have had this problem. I just picked off the bubbled area, buffed the shine off the polish and then repainted the lines. I always find a work around and I enjoy experimenting to make things work for me. 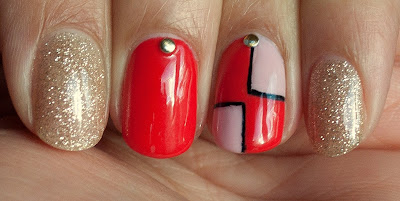 I'm going to try my best to stick with this manicure over the next few weeks - just to test Gellux's longevity. Hopefully, if Santa is good to me this year, I might be able to increase my Gellux stash!
I should also say that despite there being reviews suggesting that there have been issues with removal, I've not encountered any problems.  On this occasion I've used Salon System Profile's new 'Easy-off' base-coat...we'll see how it goes.
xx