Friends, as you will already know, I started my VTCT Level 2 in Nail Technology (nail extensions) on yesterday.

First, let me start by saying that I am a moaner. I believe in good customer service and it upsets me terribly when I'm told to expect something and it doesn't come to fruition. I paid for my course at the beginning of February (two courses actually - the introduction and then the tech) and got my receipt and enrolment card. Great. I've been attending the first course without issue...but had noted that I hadn't received further information about the tech course. I called the college several times to see if I could glean some information from someone, so that I didn't have to start shouting at reception. I would do that you see...I have an awful temper *blush*.  I was told that I would receive something in the post. Erm, I didn't.

I went along to college anyway, just feeling that there would be some sort of an issue.  As I sat with a few of the girls I knew from the other course and the lecturer came out and started calling names on her register. Guess who she didn't call? That's right, me. It was suggested that there might have been an 'admin problem' or that there'd been some issue with my enrolment, but as there were two other ladies who didn't seem to be there at that moment, I'd be allowed to tag along. Okay, I don't DO tagging along, especially when I have spent a lot of money to get onto this course. I decided not to have a shout first thing in the morning, because this issue would have had nothing to do with the lecturer herself. The security guy was also about 3 feet taller than me too and I wasn't about to get booted off campus.

The first part of the day was spent on admin. Filling in forms and promising not to go drinking barbacide or flicking paraffin wax at one another - riveting stuff. I also got my ego stroked a few times too; some of the younger girls in their 20's thought I was the same age as them. Hmm, must have been my dewy make-up.

After lunch, we were shown how to prepare a natural nail bed for the application of a false nail tip and then got to apply some. You have absolutely no idea how frustrating such a simple task could be! We can't order our own supplies until week four, so we were stuck with fighting to find tips (from the college supplies) that fit, to find glue that hasn't dried out, files and all the other things that we really should have had access to. I don't know if I was put off by people staring at me when I was working, but I had to fight to get the nails to stay stuck! Every time I went in to clip off the extra lengths, the nails would ping off in all directions. Admittedly, it didn't help that the only tips left for use were either far too big or way too small. I also used a little too much glue at times. Once the tip was in place, we had to use an emery board to 'blend' the seam between the nail bed and the end of the false nail tip. This was also pretty difficult because we were trying to make the join look seamless, without filing the nail bed to death. The key to this was small, light strokes at the joining point.

Friends, I'm not complaining. I had a great day today and got to speak to some nice people. My lecturer was actually trained by Lena White of OPI 22 years ago...so I MUST be in good hands, right?

Would you like to see what I wore to class?  They said 'bare' nails, and I took that to mean 'less garish than usual'... 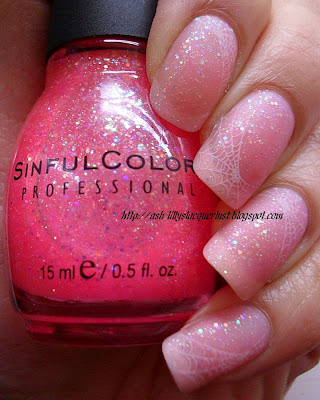 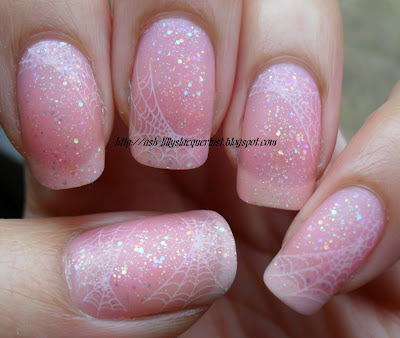 This is Sinful Color's 'Pinky Glitter', with spider webs from BM plate 13 and two coats of matte top coat.
I realise that this was probably not appropriate, but hey.

The day before this, I was wearing this little man, sent to me by MariJo 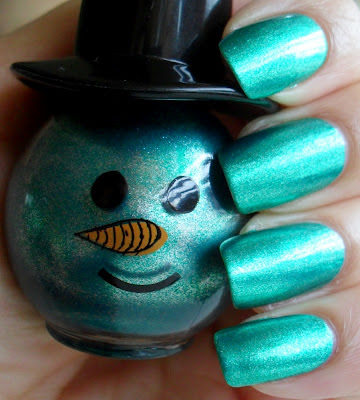 My green Snowman! I love him...and he didn't stain either.

I'll come back with pictures of my practical work at some point...is that something you'd like?
Is there anything else you might want to see here (techniques, art, theoretical information about nail care, more shouty posts) Let me know!