I've got a story for you, so if you aren't in the reading mood just scroll to the pics!

It was the baby's first birthday today and a few of the nearest and dearest came over this evening. Although I'm so happy to reach this milestone, it also makes me feel a bit ancient. On the other hand, I suppose I shouldn't really complain.  I was in Tesco's yesterday, buying plastic cutlery for when family/friends come over to celebrate the baby's birthday on Sunday. The self-serve checkout made a funny noise and I had to call for assistance.  When he came over, the assistant told me that the till had gone berserk because I had bought more than two packs of cutlery. I said, 'but they're plastic!'. He laughed and said 'I know, it's stupid, but that's how it goes'. We shared a chuckle, but then the chuckle started to wane and then there was silence. He was still standing by my till looking at me expectantly, so I asked what he wanted from me...so that I could get back to work....with my plastic forks He told me that I needed to show him ID to prove I was over the age of 25. Hmmm. I didn't know whether to laugh at him or start shouting. I said that I didn't have ID, but I needed my spoons. He shook his head at me. I told him that I was 30-ehem and then he looked at me in shock, swiped his card thingy and sent me on my way, forks an' all.

Now to the manicure!!
I know that shatter/crackle effect polish has been everywhere over the last few months and I have a feeling that this will continue, due more and more cosmetics companies jumping on the bandwagon.. Fortunately, there are so many different ways that this polish can be used and I'm happy to see that people are experimenting with it.

Here is my offering.

I started off with this: Rimmel's Cranberry Zest. Wow. This polish smells so sweet I started to get a headache after putting on the first coat.
I then added a coat of Zoya Astra - an indulgent red glitter. When this was dry, I put a thin strip of scotch tape in the middle of the nail and painted Barry M's Nail Effects in Black over it. When that was dry, I removed the strip and and added some nail stickers. 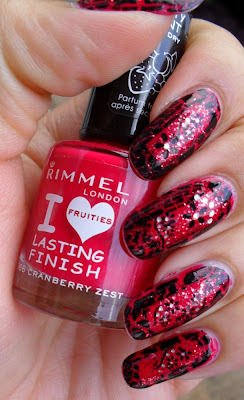 I tried to use the crackle as a frame. 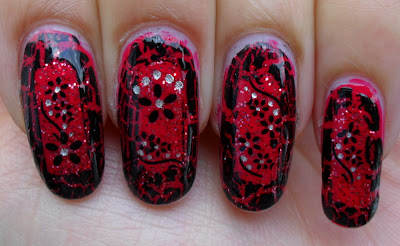 Upon closer inspection you may notice the polish around the cuticle area. Generally, I have a very steady hand. I RARELY need to go back to a manicure to clean the edges with acetone and a flat brush. Today was no exception. The cranberry colour was about a millimetre away from my nail edges and cuticles, it was neat and there was no colour bleed.  That was until the Seche Vite.

I love Seche Vite as a top coat because, although it retails at about £10 in Boots, it dries your polish so quickly and leaves a beautiful gloss, so if you are a late night painter, you won't wake up with the imprint of your sheets on your nails in the morning. What I DON'T like is the shrinkage. Yep, I slathered on the Seche and it made the polish shrink in on itself.

And look at the tips of the nail after a few hours of wear - it looks like it's three days in! I was so annoyed because the manicure looked like a mess as a result of this shrinkage. I refused to do a clean-up because it would end up looking like the manicure had been growing out for two weeks. As I knew that this would be coming off over the weekend, I thought I'd play with it a little. 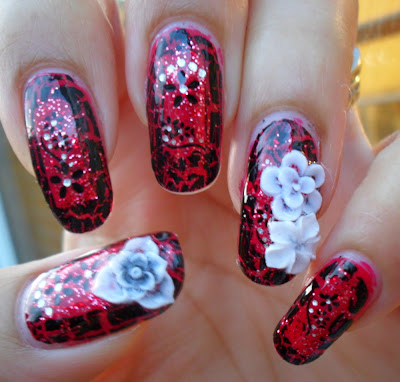 I have some 3D flowers and acrylic bows to put in my shop but thought I'd sample them first. They feel like rubber and were adhered with a bit of clear nail varnish and layered with the same - NOT the Seche though! The flowers are lovely and are ideal if you want to recreate a Kawaii manicure (I LOVE these but I'd  have to tone them down for conferences at work!) Unfortunately, I didn't pick the flowers that actually complemented the original manicure!! I was even more annoyed with myself that I peeled these off whilst trying to stay motivated in my team meeting on Thursday!
I'm not sure how to combat the shrinkage yet, but once I know, I'll let you know. If YOU know, let ME know!
Okay, enough twaddle. Goodnight friends!
xx
Posted by Liane at 22:17